Honest-1 Featured in The Glendale Star 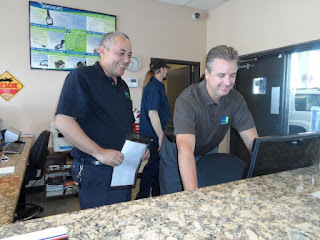 Honest-1 was recently featured in The Glendale Star in an article titled, "Local auto shop holds true to being 'honest'".

Click HERE for the full article or begin reading below:

By: Kathryn Stafford and Ayla Hopper
Anyone who drives knows the feeling of putting the key in the ignition and coming to find their car won’t start. Many thoughts run through their head, including a car service provider. Car owners want the best service for their car, and not to mention, an “honest” mechanic. Honest 1 Auto Care really does live up to their name.
The car service is a national franchise and the Glendale location, 15420 N. 59th Ave., is owned and operated by Thomas Young.
Young grew up in Georgia, and went to the Citadel on a NROTC military scholarship in 1975. He received an active duty commission in the U.S. Marine’s in 1979 as a Second Lieutenant. After Young left the Marine Cops, he joined the Georgia Air National Guard, 128th Tactical Fighter Squadron. Young continued his journey by becoming an FBI agent in 1987. After Young retired, he cumulated more than 30 years of government service. Young’s loyal service doesn’t stop there. After retirement he wanted to do something a little different. Using his knack of helping the public and by using loyalty, honesty, Young opened Honest 1 Auto Care in Glendale. A car care community holding true to being honest.
Posted by Honest-1 Auto Care at 9:15 AM

Honest-1 Auto Care
Honest-1® is the nation's only Eco-Friendly Auto Care® chain. We offer a full range of automotive service and repairs. Along with providing the best service, Honest-1® wants to ensure our customers are thoroughly educated on the systems and services necessary to keep their vehicles in the best running condition possible.